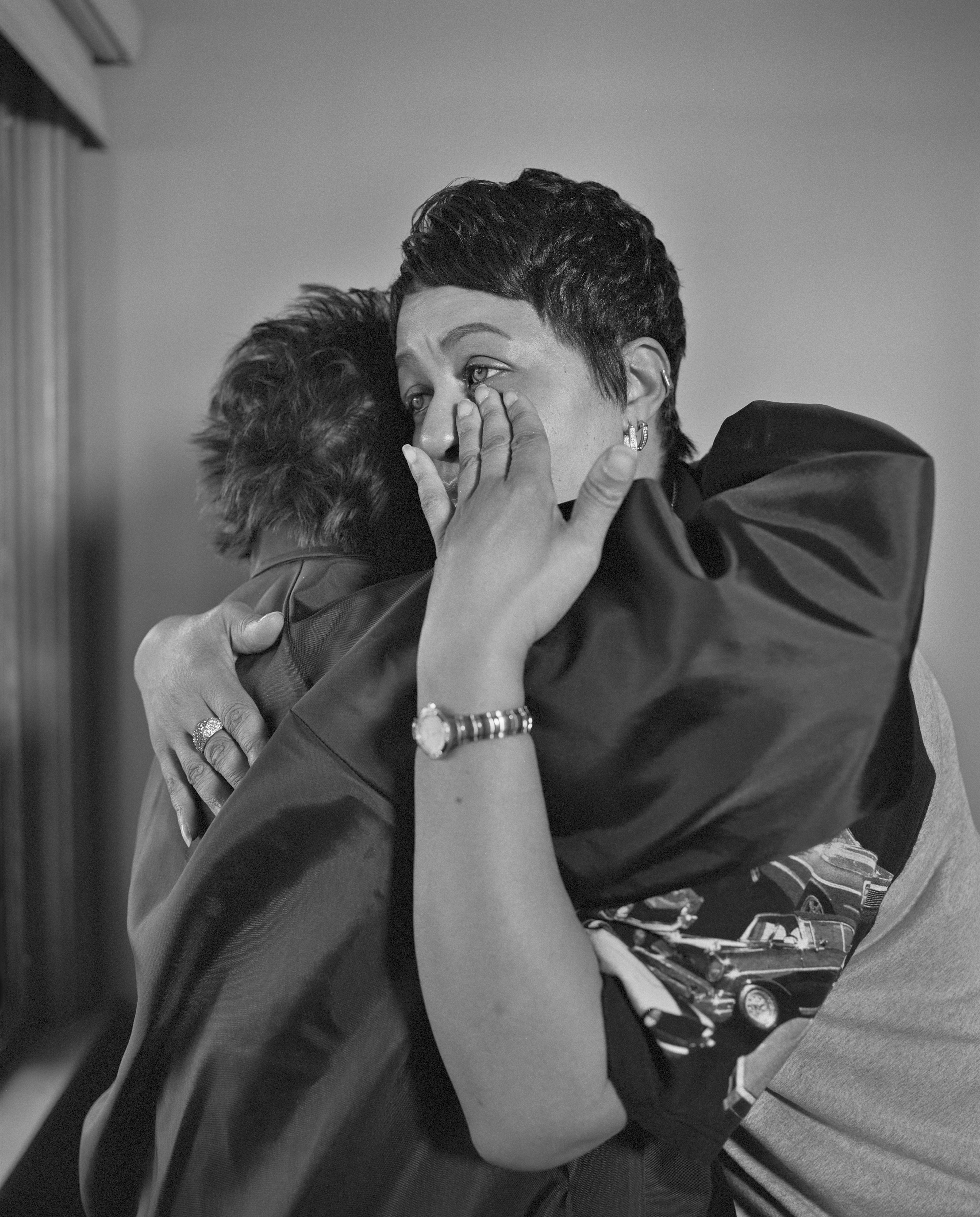 The feeling in the plant on my last day was eerie, because nobody knew what to say. That’s why I was so hellbent on trying to get out of there as fast as I could. I didn’t want to see that last Cruze—I just didn’t. I walked out, and I didn’t look back. I didn’t want to look back. I just kept saying to myself, “This is the last time you’re going to make this trip, from somewhere that you’ve been going for 22 years.” I was so loyal to G.M., but it’s just a game to them.

The situation is complicated by the fact that less than ever does the mere reflection of reality reveal anything about reality. A photograph of the Krupp works or the AEG tells us next to nothing about these institutions. Actual reality has slipped into the functional. The reification of human relations—the factory, say—means that they are no longer explicit. So something must in fact be built up, something artificial, posed.1


In today’s image culture, visibility is one of the metrics of cultural value. This is the currency that LaToya Ruby Frazier’s photography deals in. Developing projects in close collaboration with the communities of Lordstown, Ohio (The Last Cruze), Flint, Michigan (Flint Is Family In Three Acts), the Borinage, Belgium (And From The Coaltips A Tree Will Rise), and her hometown of Braddock, Pennsylvania (The Notion of Family), Frazier is known for spending weeks living with her subjects in order to embed herself within a project. The artist does not dwell on the speculative, but rather, driven by a desire to enact social change through the transformation of culture, aims to realize material possibilities in the contexts in which she works. In the case of Flint Is Family In Three Acts, this led to Frazier working with residents Shea Cobb and Amber Hasan to help acquire an atmospheric water generator to provide clean water for the community. This direct action is exemplary of Frazier’s commitment to serving working-class communities and honoring their experiences.

In The Notion of Family (2001–14), Frazier linked the intimacy of the domestic interior with the social settings of public life, photographing three generations of her family to explore the history of Braddock against its present-day realities as a deindustrialized town: chronic unemployment, white flight, and environmental disease, to name only a few symptoms. These threats are also present in The Last Cruze (2019) which reads almost as a prequel to the former series, showing the process of deindustrialization in motion—its title a reference to the gradual closure of a General Motors factory in Lordstown. The series senses the reciprocal effects of “unallocation” (managerial jargon for factory closure) on the community as they work toward producing the last line of Chevrolet Cruzes. Like The Notion of Family, The Last Cruze does not trade in the currency of sympathy or victimhood when Frazier configures the human cost of political neglect and indifference. Rather, she stages the possibility for empathy within understandings of its structural causes. Involving herself in the struggles of Lordstown, a place not so different to Frazier’s Braddock, she records what happens when the industrial heart of a town is torn from its social fabric.

As Louis Lumière’s film Workers Leaving the Lumière Factory inferred in 1895: what happens when the workers return home? We might ask what photography has to say about this moment. In one of the images from The Last Cruze, Frazier foregrounds an embrace between Kesha Scales and her “best friend and former co-worker” Beverly Williams. As Williams’ body encloses on Scales, her black coach jacket appears almost to drape over Scales, drawing attention to the gesture she makes to catch a tear with her left hand. Frazier frames the emotion of this action, which is given further credence by Scales’ accompanying testimony. While Scales suggests that factory work has “hardened her,” its closure seems to betray her resilience which was formed by it, causing her to show a moment of its emotional processing. While an interpersonal history is proposed by the title, the invitation into Scales’ living room is conditional—the relationship between the two women is a storied friendship across life and work that reaches beyond this particular image. An allusion which is matched by the print of vintage cars worn on the sleeve of Scales’ shirt, hinting at her identification with her workplace of twenty-two years.

In this image and others from The Last Cruze, Frazier confers currency to the portrayal of working-class lived experience by making the emotional impact of the factory closure visible. It is through testimonies such as these that Frazier underscores how the socio-economic relationships between American workers and their employers are underwritten by the lineages of structural racialism and capitalist accumulation. Whereas these complex processes tend to be spatially and temporally elusive, a series such as The Last Cruze shows how Frazier’s work acknowledges the contemporary manifestations of these conditions in the present. As Frazier explains, “It’s about telling longer sustained stories and building archives that document what I believe are crimes against humanity or basic human rights violations, far after the media has vacated these locations.”2

While the above image of Kesha Scales appeared on the cover of the October 2019 issue of The New York Times Magazine containing an editorial that samples part of The Last Cruze, Frazier makes it clear that her relationship with mass media is one that is met by the critical approach of an artist.3 In her own words: “I use the mainstream media as a platform to address urgent issues and to give everyday people an amplifier to speak inside these mediated platforms, but then I go far beyond the media’s agenda, and visualize and tell a much longer and deeper story with residents once the current event/issue is no longer headline news.”4 As she notes, her engagement with these issues and the people that live through them reaches far beyond the regular tempo of the news cycle and its insatiable hunger for images. For Frazier, the position of the artist is one that requires autonomy from mass media, governmental and corporate control, and the desires of the market. She sees the position of the artist as a platform for speech, and in the tradition of James Baldwin’s 1962 essay “The Creative Process,” the artist has the role in society to uncover what goes unseen, or indeed, what is unsaid. Frazier’s willingness to engage with her subjects and their everyday lives, underscores that this process is better served by collective action—as she suggests: “where do we turn when we want to tell the truth?”5

Though it is tempting to isolate the issues in Frazier’s work to the United States, her work entreats us to assess the social costs of deindustrialization in the contexts in which we find ourselves—be it Hamburg, Sydney, or Los Angeles—as social effects that continue to play out within larger economic shifts throughout the world. While the focus of Frazier’s work on the Rust Belt has shown the racialized burden of capitalist economic management—specifically the repercussions of the trade liberalism of the Reaganomics of the 1980s and the consequential off-shoring of American jobs, suppression of trade unions, and the erosion of workers’ rights; it also gives evidence of how economic liberalization was endemic to the globalization of capitalist industry—a fact reenforced by the artist’s And From The Coaltips A Tree Will Rise, a series developed with ex-coal miners and their families in the Borinage region of Belgium and Frazier’s first series made outside of the United States.

To consider the relationship between globalist expansion and the subsequent deindustrialization in Germany is to acknowledge its attenuation by the fall of the USSR and the complex economic and political issues entailed in the reunification of two different states. Comparatively, while the deindustrialization of East Germany was a unique phenomenon perhaps most remembered for the events surrounding the Treuhandanstalt (Trust Agency) formed to privatize East German industry, the steel and coal industry in the West’s Ruhrgebiet faced similar economic restructuring and social effects as the Rust Belt. Frazier’s work encourages us to consider how the ongoing effects of these processes are represented in the contemporary German media landscape, and by extension, query the absence of these representations in contemporary German photography.

Indeed, those same industrial sites of the Ruhrgebiet became the subjects of the photography of Bernd and Hilla Becher, whose work is emblematic of the Neue Sachlichkeit (New Objectivity) that became the basis of the Düsseldorf School of Photography (and paved the way for students including Andreas Gursky, Candida Höfer, Axel Hütte, Thomas Ruff and Thomas Struth). The affective tenor of Frazier’s work is formally absented in the “objective” photographs of the Bechers—photographs which cognitively and representationally remove the factory from social reality, showing little affect and no people; or as Brecht would have it, photographs that tell us “next to nothing about these institutions.” Frazier’s work inverts this rigid formalism, establishing a connection between the site of production and the social worlds for people like Kesha Scales and Beverly Williams whose daily lives are entangled with these sites as the sources of their livelihood. While at the level of the medium, this points to the inextricable link between the development of photography and industrialization, and its function in the family home. By exposing connections between sites of production and their constitutive “outside,” Frazier attributes a visibility to her subjects that offers a place to speak that is markedly self-determined.