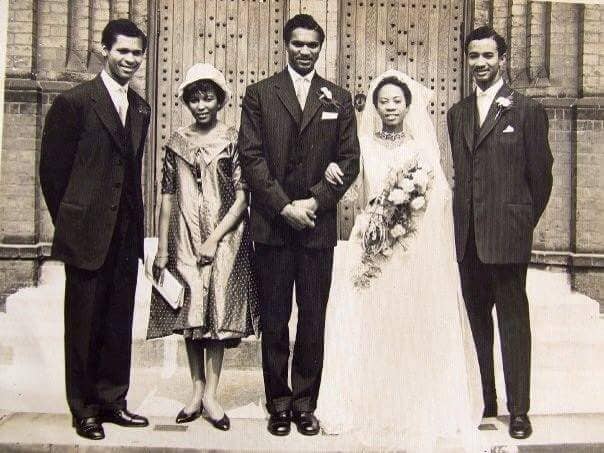 On August 22, 1959, Ms. Beatrice Orleans-Harding became Mrs. Beatrice Duncan. She was late to her wedding, but radiant. Gleaming in swaths of satin and lace, she nursed a bouquet of flowers closely. Her new husband was John Willie Kwamina Duncan, who cut a dashing figure in a three-piece suit. She was diminutive and slight; he was towering, athletic. A gentle grin remained on both of their faces for the duration of the day. Together, they looked good.

Extended relatives, parents, neighbors, colleagues, and friends flocked to the event, and the pair’s pooled resources covered the core components of the ceremony—a white dress, a black suit, the priest, flowers, tie, and crucially, the wedding photographer. One such image shows them standing on the steps of St. Patrick’s Church in Woolwich, London, self-assured, looking forward. Flanked by his brothers, Ekow and Josbert, and her soon-to-be sister in-law, Elaine Buckle. Deliberate and studied, the picture depicts a fledgling family on the cusp of life together, in a city straining to comprehend the distinct, multiplicities of experience across the African continent, Caribbean, and India. These communities would articulate themselves alongside and in relation to one another to form twentieth-century Black Britain.

The newlyweds were relatively new to London, Ghanaian immigrants by way of Nigeria. Kwame had received a scholarship from the University of Ibadan to train as an Engineer at Woolwich Polytechnic, and Betty was stationed at Ascot, working to be an orthopedic nurse. They had courted for five years, two of which consisted of daily hand-written correspondence—the likes of which seem deeply enchanting and somewhat incomprehensible from 2021. Their first proper meeting was at an annual reception organized by the West African Students Union. He spotted her in the crowd, strode over and stated, “As soon as I graduate, we will be married.” Perhaps not the most romantic proposal, but startlingly precise.

That same clarity of vision mapped onto his garment selection for the special day. While Betty fretted for months over silhouette, material, and detail, he made a single visit to Burtons and selected an understated, elegant design for his suit. Black, with pinstripes. An amethyst purple pocket square—to match her flowers. The jacket resembled others he wore during that time, a single-breasted woolen situation with a strong cut to emphasize his shoulders, paired with a crisp white button-down shirt, which he ironed without fail, and a rotation of silk ties that he savored.

But this suit was different. According to Betty, “he saw it as the outfit that brought him love.” He treated it with reverence. He wore it once again for his brother Josbert’s wedding to Elaine, but nary beyond that. At some point, her wedding dress was lost to the bureaucratic glitches of a peripatetic lifestyle—in a suitcase on a conveyor belt to nowhere. Meanwhile the suit remained, hanging in the back of his closet, intermittently brought out to be dry-cleaned over the course of six decades, as the couple moved to Canada, then the United States, then Nigeria, Congo-Brazzaville, Kenya, Zambia, Zimbabwe, Sierra Leone, and finally Nigeria again.

A couple months before his death on November 21, 2019, Kwame wrote out a request that he be buried in his wedding suit. Beyond the widespread sentiment of “meeting your maker in style,” this gesture struck me as a deeply photographic one. While standing over his casket in the humid Lagos air, all I could think of were his wedding pictures—the only other physical remnants of my grandparents’ special day in 1959. With this anticipatory posthumous action, my grandfather had fixed a particular image of himself, creating a means of visual relation mediated through his marital photograph. In so doing, he created a salve for us who mourned him, through the reminder of a moment of happiness. He knew how images functioned, and this was how he wanted to be remembered, ensconced in love.

This entry is an excerpt from the piece “Looking Good,” published in the Fall 2021 Issue of SSENSE Magazine.