On the (Un)formalization of Architectural Design in Ghana

Penal Code and Monochrome: Notes on the Pink Dot

Thieves (or Searching for Sabu and Anna May) 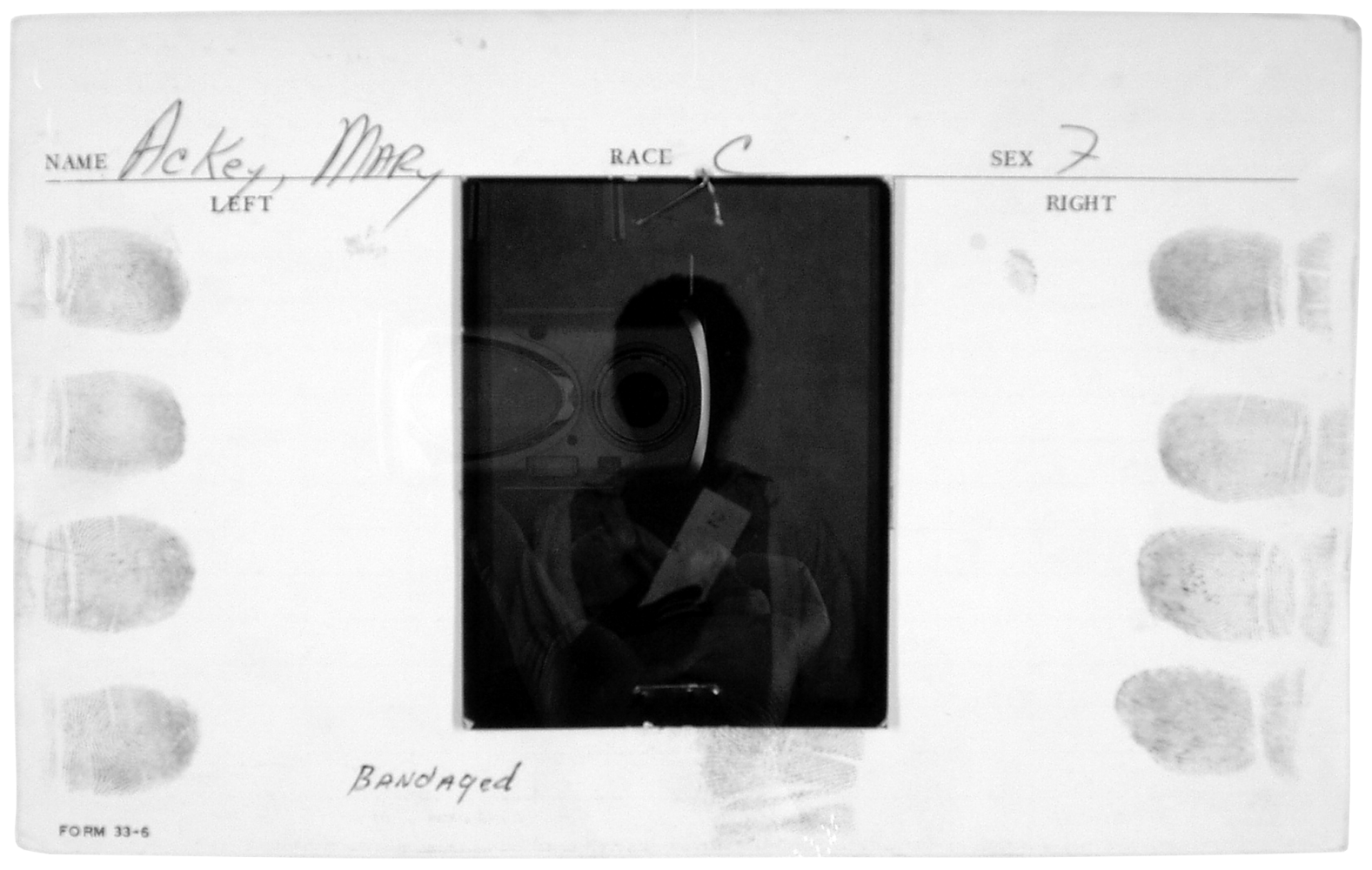 One sweltering, sun-drenched Friday sometime in July 2003, Mr. Gundlach ungently thrust a cardboard box onto my desk. Dust particles swirled in an idle dance in the rays of sunlight that wormed their way through the permanently closed blinds—protection for light-sensitive photographs—of my tiny, stuffy office on Parkallee. As usual, my collector grumbled: “Here's something for you”—and disappeared. I unpacked the box with care—and was fascinated: it contained mug shots of thirty-two inmates, male and female, of the Fulton County Prison Farm, taken far away, in Atlanta, Georgia, from the 1940s through the 1970s.1 I found myself inhaling the frontally shot, technically poor, blurred, and cropped faces, lost myself in them, and missed my train home yet again. My first vintage mug shots. I shivered despite the thirty-degree heat. But why? These were merely photographs shot by someone else, a staged reality that had nothing whatsoever to do with my own. Shaking my head self-critically, I packed up my things and drove off into the weekend.

Monday. Interstitial, a space to be looked through. A precise and thorough distinction must be made between the individual elements that make up each of the sixty-four objects—two for each mug shot. First, each photograph and its support present themselves as a cohesive pair, its architecture firmly predetermined by the standardized design and labeling of the index card to which each image is affixed. In the lower left corner of the card appears a combination of numbers and letters: “FORM 33-6.” Thus, it would appear this was a standard format used at the Fulton County Prison Farm, and perhaps at many other penal institutions in the United States as well.

The portrait of the prisoner—sometimes seen from the shoulders up, at other times only from the neck up or including much of the torso—has been stapled to the index card at the center of the upper edge of the picture by an administrative employee. In some instances, the metal clamp has been placed above the subject’s head; at other times, it enters into an absurd alliance with the hair of the portrayed. Occasionally, it even pierces the upper part of the skull, inflicting an injury on the prisoner that—while brutal and serious—they do not register. Only I notice it.

Nevertheless, the employee's approach was both clever and pragmatic, as the photograph and its support have been preserved to this day as intended: the context remains intact. If the image collected for a particular record is a bit smaller than the standard size, stapled askew, or altogether absent, it becomes apparent that printed on the card is a demarcated field labeled “PHOTO.” The portrait belongs here. Further keywords for other entries are also given, among them “NAME,” “RACE,” and “SEX.” In addition, each card has one half designated “LEFT” and another “RIGHT”; these correspond to the respective side of the prisoner's body. These areas, arranged around the portrait, are filled with fingerprints. In each case, in parallel and from top to bottom on the respective left and right edges of the photograph: little finger, ring finger, middle finger, index finger. The imprints of each thumb appear at the bottom of the card. Some are broad, strong, and determined, while others are hesitant and elfishly delicate.

Tuesday. This convolute of records allows me no rest. Alphonse Bertillon, from 1882 the head of the identification service of the Paris police, developed the Bertillonage, an anthropometric methodology for the registration of suspects. This consisted of four elements: the measurement of certain body parts (in particular the ears—Bertillon wrote with some enthusiasm: “Unchangeable in its form since birth, resistant to the influences of environment and upbringing, this organ remains unchanged throughout life, like an inviolable legacy in heredity”); a biometric account of the person (the “portrait parlé” or “speaking portrait”) which recorded physical measurements, such as arm span and height; an inventory of identifying characteristics (scars, physical defects, tattoos, and the like); and a photograph—which to this day remain primary components of identification service investigations. In practice, however, the Bertillonage proved overly cumbersome and complicated. In 1926, the criminologist Robert Heindl complained that “Bertillon's scheme for describing the nose is still relatively simple. Much more complicated is the description of the ear. Here a whole ship’s catalog of ear parts is enumerated, and for each of these parts there are again innumerable sizes, forms and angles of inclination.”

Where to Bertillon the ears were absolutely unique proof of distinctiveness, to Francis Galton this proof was to be found in the lines of the skin of the fingertips: the papillary ridges. These form in the embryo in the fourth month in the womb and remain intact until the dissolution of the body after death, and feature between forty and one hundred anatomical features that can be distinguished from one another by their arches, loops and whorl patterns, bifurcations, sudden endings, eyes, islands, and hooks. This total systemization of the body would underwrite his pseudo-scientific attempts to produce a genealogy of criminality through physical “types.” Galton developed the classification system of dactyloscopy for police investigative work, which soon made Bertillon's extended description of persons and anthropometry obsolete. The results of this development lie before me this afternoon in sixty-four copies.

Wednesday. Still mug shots. From his desk, Mr. Gundlach observes me sharply, giving me the clear sense he is beginning to find me somewhat odd. Having carefully considered the individual elements of each individual artifact in the days before, I now begin consciously to interlace them and, very slowly, get to the root of my fascination. In fact, the photos are, and remain, poorly executed portraits, accompanied by now-meaningless fingerprints—an administrative act conducted by an authority to identify a person. And this is precisely the point: each gathering of elements leads to the discovery of tiny human traces that are evidenced by FORM 33-6. These are informed by personal contact with the prisoner, obviously first by the employee of the administration, but also indirectly by the prisoners themselves: through, for example, the different hands in which entries were written, or the sounds of names: Burton, Virgle (sic!—surely “Virgil” and clearly a spelling mistake on the part of an employee) or Cash, Rebecca Ann. I discover informative additions that designate contacts, such as on the card belonging to Brooks, Victor Howard: “Mother: Dee Linn Brooks”; the address of Carolin Moore’s brother is recorded; Ann Pittman’s card features the telephone number of her babysitter, with the reference “same address”—very likely because Ann's children were temporarily living there while she was incarcerated. The longer I look, the sadder I become.

Thursday. Mr. Gundlach comes to check on me and asks what I am doing here all the time. I show him what I have just discovered about the “non-existence” of traces. He seems irritated. I show him what I mean: Mary Ackey's card has the handwritten comment “bandaged” on its lower left where her left thumbprint should appear. Also, for Johnny Dale's left hand, only three of five fingerprints have been immortalized, with the explanation “first two fingers unable to fingerprint.” Prints of Virgil Burton's entire right hand are missing, a fact the administrative assistant comments on with a rather offhand “off,” which fills the entire right half of the card. Mr. Gundlach went rather silent. Together we went through the objects one by one, sharing what we observed.

The alignment of all these administrative and personal traces, as well as the content left behind, both consciously and unconsciously, during the processing of FORM 33-6 inspires a sad fascination with these objects. The involuntary circumstance of compiling real-life situations and experiences in the space of 12.7 x 20.2 cm index cards, whose dimensions are intended to allow for the identification of a person, leads an administrative system of order to shatter upon reaching its own, completely preposterous limits.