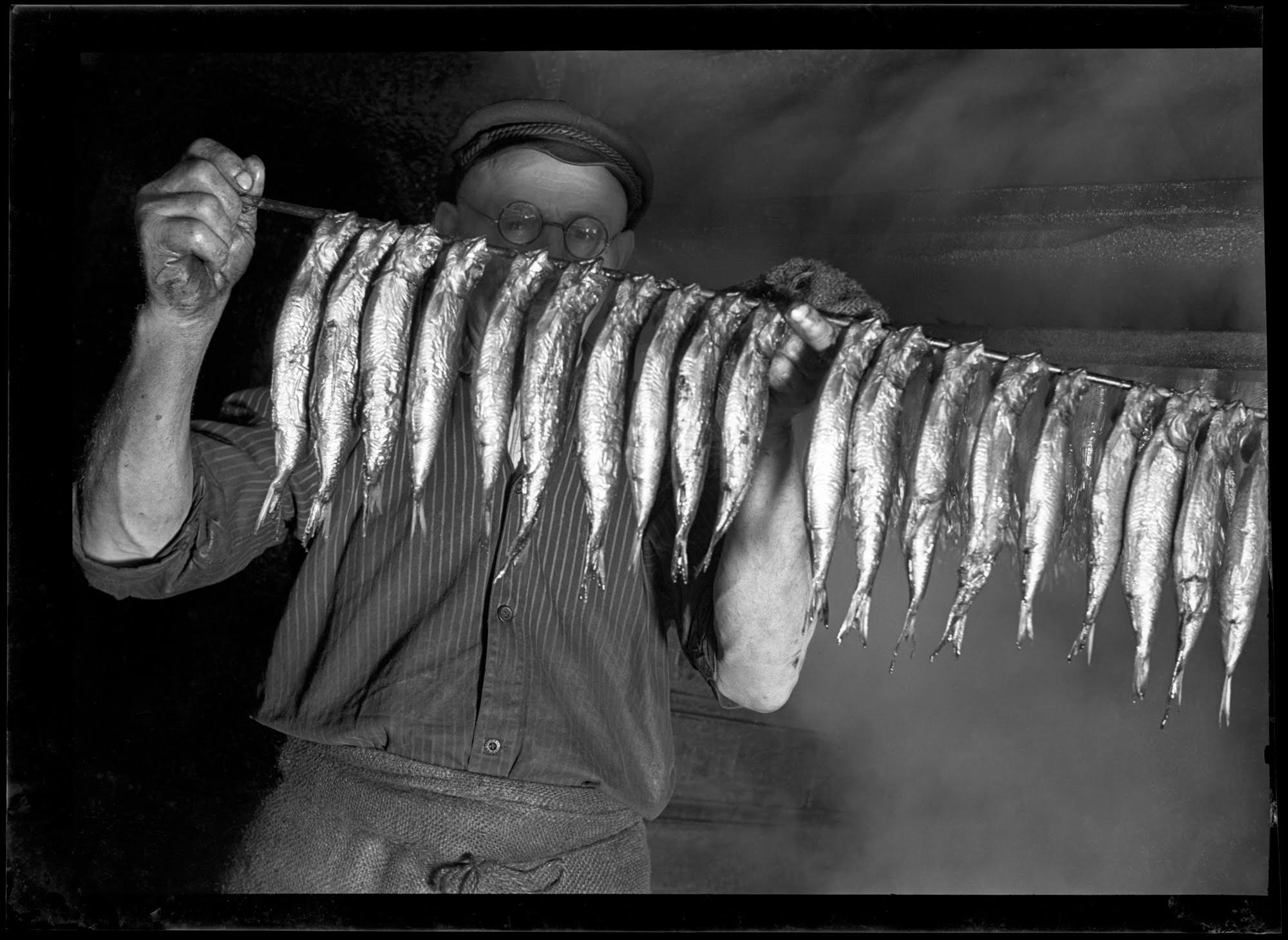 A row of silver herrings shimmer before the darkness of the soot-blackened smokehouse and its rising smoke. A worker dressed in a striped fisherman's shirt and a coarse burlap apron focuses intently on the task of evenly spacing the fish along a metal rod. His strong hands shine with layers of soot and grease.

Arbeiter in einer Fischräucherei, Altona was taken by the photographer Fide Struck when he visited the smokehouse in 1931. In his several visits to the area––a formally independent city that was only incorporated into Hamburg in 1937––Struck gravitated towards the fishing port, the rush of trade in the fish auction hall, the physical and visceral labor of gutting and smoking, and the flows of commerce.

In the collection of glass negatives from which this image hails, the photographer seems to belong without question, sharing space with the workers and traders he photographed. At the smokehouse, Struck foregrounds the cycles of fish from animals into raw material and foodstuff. In the image before you, we see a portrait of a worker rather than a documentary image. Struck carefully intersects the vertical line of the silvery fish bodies and the man’s bare forearms. The herrings act as a playful reflective surface, lighting up the worker's forehead under his cap, and the glass of his spectacles.

A self-taught photographer who took to photography during the German reform movement, Struck largely created photo reportage in the style of social documentary. Yet, while his thematic choices follow these aims, his aesthetic decisions bear the influence of Neues Sehen (New Vision), a movement in the 1920s that, where it incorporated photography, broadly experimented with composition, lighting, and exposure methods. These considerations came together in Struck's approach to the everyday lives of people at their place of work, within locales of trade and industry, and in the street. His empathy for the world of laborers and farmers also carried a political charge. His reportage in “red Altona,” where the majority voted for communists or social democrats, is typical of this approach.

This image is one of many that has lain dormant for decades. In 1941, Struck stored his glass negatives in a wooden suitcase, and this was only opened in 2015 by his son, the filmmaker Thomas Struck. Luckily, this cache was gently wrapped in newspaper. Here presented as a large contact print, Struck's image opens a window onto a bygone era, offering an embedded perspective on the worlds of life and work in Altona and Hamburg.